"if there's glory in miracles
it's that they're reversible." 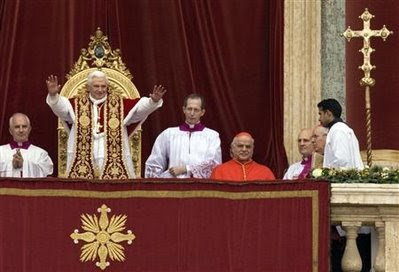 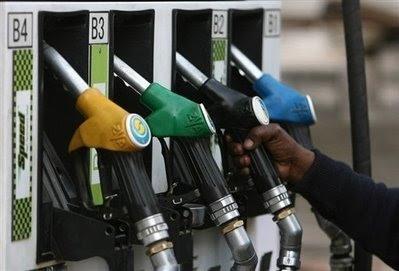 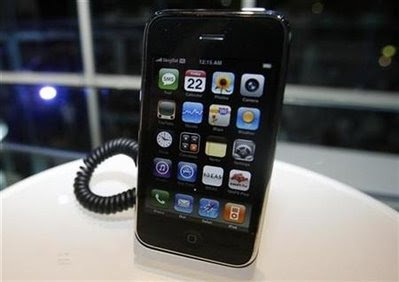 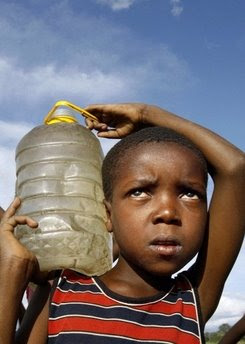 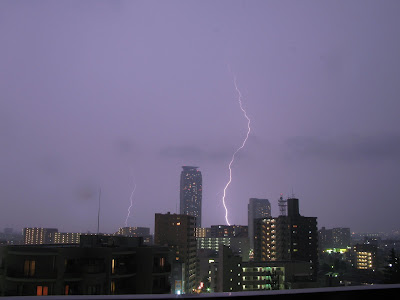 The Old Tokyo Master walks slowly, gently tapping the ground with his cane. Quiet and attentive. Pigeons scatter and take to the wide clear sky. People bustle and papers swirl in the wintery winds. Seemingly invisible, The Master pays and picks up a bag of rice and places it on his shoulder. The retailer watching quietly as The Master moves on and bleeds into the crowds of shoppers. Through tiny back streets, past the grease exhaust plumes of restaurant piping and boxes stacked on top of garbage crates, he makes his way to a tattered, squeaky door that leads to a set of stairs. Walking slowly down the hall he slides the key into the hole and enters. Lacquered wood floors and ceramic figurines glisten in the golden sunlight shooting through the blinds into his dark apartment. Collections of Buddhist and Taoist texts line the book shelves and Aikido manuals are neatly stacked next to the dusty old television. On the stove whistles a kettle and steaming water is delicately poured into a clay mug holding tea leaves. Pigeons line the wires outside the window and a cat licks his paws on the ledge. The Master kneels and places the mug on the top of the low rise table. A black and white picture of his father hangs on the wall. His father is standing on the rocks on a shoreline somewhere in the , lean muscle still wrapping his Father’s ninety-year old frame. Composed and silent, The Old Tokyo Master closes his eyes, envisioning his body corroding and material belongings composting into nothingness, the vibrant faces and voices of his family and friends slowly fading into eternal silence. A clock ticks in the background. After a few minutes he opens his eyes and takes a sip of tea and bends to look out the window. A former student of his runs a Dojo down the street, he can see other students learning the movements of self-awareness and self-discipline.

Mastering the Self is a constant practice.

The Slice of Winter 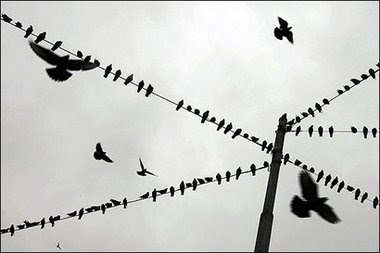 my tepid breath speaks steamy soliloquies to meet the grey skied gloom. a mediocre half-felt solemnity stacked on a previous, better felt one. my car inches down the wet road in tow and lead of angry customers trying to belly up to life's disappointing bar. open all night it's says, but the beer in the kegs is flat and my hat is sitting in some other guy's crumbs. with a bill raised in my hand I flag down the busy keep as she pours me what's left until the spigot spits air. i swallow half-consciously the lame, over sat, brew and bat a bored eye out the window. the traffic is moving now and you might get the reckless feeling like you were on the way but there are more accidents ahead for people to entertain themselves with. a cell-phone ring, a horn honk, a rumbling truck, radio chatter. a young grease monkey rolls a tire through the snow with a smoke hanging from his lower lip back into the garage. a lady in front is putting on lipstick. what am I waiting for? to get to work? so I can get my work done? so I can get home? back into my bed? back into my thoughts...the airport lounge before I take off into my dreams? of sex, drugs, women,violence, hate, anger, loneliness, desperation? we can wake up from this...rather these cycles... of selfish longing, hungry ghosts, pulling me down into ignorance...the father of lies. traffic has stopped. one guy gets out to check. seeing what's ahead might speed things up. c'mon there's money to be made...I want mine before the economy drops off like a nut-filled terd pinched from the creamy, pimpled ass-cheeks of capitalism. for now I just watch. I roll the window down and watch. the clarity of the images, the smell of the slice of ice cold winter air. like a TV. but better. better than Hi-Def, Blue-Ray, Plasma. It's so high definition; I can touch it. I can taste it. I can feel it. totally free. no monthly charges.
Posted by Human Paradox at 4:36 PM 4 comments: 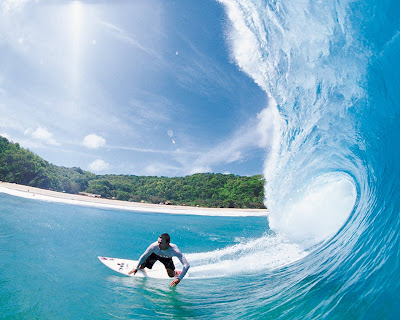 Friday afternoon in a government office. It reeks of print toner and cheap carpeting peppered carelessly with lazy excuses and blame. Almost empty, I sit with only but a few scattered consultants at crumb-laden desks painted with coffee ring stains. My mind is numb with document types, words and protocol. While many employees sit away the afternoon in their sun rooms at home, thumbing through Oprah magazines, I hammer out line after line of phrasing trying to prove a statement through cold legal logic. My back is sore from sitting on this old swivel chair and my neck tenses and hopes drain at the thought of a Saturday and Sunday afternoon spent sifting through more reports. I must do this for survival.

Somewhere on a beach in Ecuador, a man waxes down a surfboard in the beating sun, skin and arms bronzed and chiseled. Pausing, he takes a deep drink of cold blackberry juice, held in a metal canister. The electric sun slides fast across the ice blue sea begging him to chase the golden line. The warm wind wisps sand across his back as he pushes the board into the foamy water. Belly down he paddles to meet the laughing waves. The muscle soreness burns slow through his arms and legs. Heart rate rising. Miles of purple, blue and black below and open blue above. The warm water starting to grab and move him. Faster now into the infinite. The scream of desire pulses through the body.....ready to catch the flow...

His bank account book buried deep in some boxes miles back at the beach house. The melancholy illusion of the rat race buried light years away.

Rocketing now through the air as the board bullets across the liquid blue chasing hard the golden ray of the sun.

The shock of joy busts through years of sadness as he falls gently...

into the arms of the ocean.
Posted by Human Paradox at 6:05 PM 1 comment: 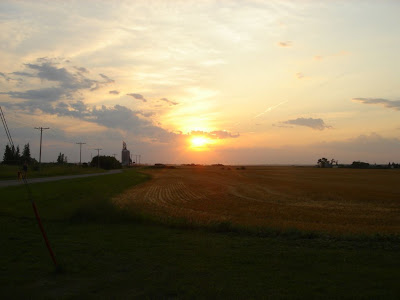 On January 8, 2008, this New Year opened with the tragic death of a friend of mine. Steven Ford Leigh, 34 years young, lost his life in a car accident. Steve was an amazing person who exemplified the true independent thinker. From our conversations ranging from Aristotle to Zoroaster to our summers running a business of washing windows, cutting grass and trimming hedges to mountain biking through the endless woods to sitting out all night drinking cold beer on the dock of his quiet cottage lake there was no end to this man's creative brilliance and perpetual evolution of consciousness.

Steve was one of those people who polished off degrees in computer science and sociology for "something to do" yet could be equally as fascinated by a video game, a low budget foreign film or a peaceful paddle in a canoe. Steve and I used to sit on the rooftop of his parent's home in the Ottawa suburbs and knock back the pints while laughing at all the zombified working stiffs blobbed out in front of the flickering TV light blasting out from the neighborhood living room windows. It was our way of standing against ever ticking clock of time, adulthood and unchosen responsibility. I'm glad I had the chance to get to know Steve Leigh through our turbulent yet under-stimulated years in high school and fractured years of university and I must admit that he was one of the most fervent advocates of critical and truthful scientific thought I have ever known. I will miss our heated arguments and frustrated laughter shared over the natural human misconceptions of religion and science, God's existence and passionate atheism, the neurophysiology of spiritual experience and the link between altered states of consciousness and a subtler, more translucent reality. I will miss Steve's expositions on ultimate military strategy, political theory and the possibility of time travel.

It wasn't until the "working world" of adulthood became a unconsciously socialized priority in my life that I began to see Steve less and less. We hadn't spoken for about a year and then I heard about his passing. The years I knew Steve were some of the best years of my life but we also went through some of the most fundamentally challenging stages of adolescent growth which can be terrible and cause people to lash out at each other in ways that time will often make you regret. Being a ravenous reader he could tear loopholes in philosophical arguments put together by the "best of them" with a cold RC cola in one hand and typing on a computer keyboard with the other. I have great respect for Steven Leigh as being a profoundly intelligent and highly moral person the likes of which is less than rare. Coming from an amazing family of loving parents and siblings, Steve had an indomitable and incredibly perceptive character that could downsize the fragile ego of a pretentious asshole as well as pinpoint the very things about yourself that were unique, that you might have forgotten, taking you from a state of existential despair to a more hopeful elation. It was good for me to hang out with someone who challenged me to challenge me.

May you rest in peace Steve
Posted by Human Paradox at 5:58 PM 12 comments: