Dale Smith, may you rest in peace.


I was a pallbearer today at a funeral for my friend Dale Smith. He was 43. I had known Dale for several years as a fellow consultant but more so as a kindred spirit and trustworthy companion.  He was a man borne of honest, hard-working small town roots, and a loving family. Dale, a doctor of history and an accomplished academic, left that trade and dove into the consultancy racket whereupon we became good friends. Importantly, Dale also took the time to tap out some classic blog entries on his own blog entitled “Fisheye Lens” starting back in 2010. Having first battled with brain cancer in 2007, he had fought and won back his life and was living vibrantly until he was diagnosed with Leukemia last December. This battle was not won but was fought valiantly with the courage and maturity of an experienced veteran. Dale and I shared a deep interest in sports, movies and music and he was unrivalled in his ability to find the most interesting, eclectic and fascinating films and bands.  He was also unmatched in his knowledge of sports history and statistics, especially in arguably the greatest sport ever invented, hockey.  I enjoyed many dart games, movies, drinks at the pubs, heated but always jovial philosophical discussions, Neil Young shows and average days hammering out reports to make our hard earned wage with Dale.  It was a seasoned gambler’s luck to have someone with such depth of character and knowledge to bounce ideas off and share daily frustrations with. It is hard to sum up a person’s life in words or try to communicate through language the experiences you shared. However, as Henri Matisse once said, “Much of the beauty that arises in art comes from the struggle an artist wages within his limited medium.” It is because our lives are mortal and because we are locked into our own separate physical and psychological universes that our experience of existence can attain beauty, and more importantly, meaning. It is because of this very limitation that our characters are stretched and tested and we gain our right to shout to the stars and the planets, “I matter!” It’s both insane and incredible how we can come into and leave this world in such a fury and how the very experience of knowing others can be ended so quickly by a disease of the blood. We plan out our lives with vain ambition but nothing ever seems to go exactly that way.  It doesn’t mean we should try to escape the future by escaping ourselves but it does mean that we must live with a healthy detachment from all things so that when the time comes we can properly let go. Perhaps the final lesson of the universe is that when we let it go, it is then that we will receive it completely. One of the many human paradoxes.

It was privilege to know Dale and I am truly glad that he has still living friends, who are friends of mine, so that together we may keep him alive in our minds and hearts.

Take a moment, take a breath, for good and bad, this experience happens once in a lifetime.

Once in a lifetime, bloggers waiting in an eatery, late at night (from left to right): The Human Paradox, The Fisheye Lens and The Square Corner. 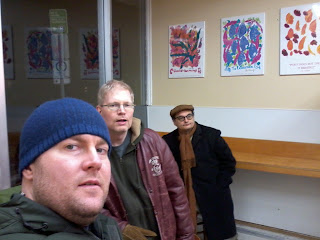